Picking a single favorite historic window treatment time period is like asking an ‘ice-cream-a-holic’ to stand at the Baskins Robins counter and name the single greatest flavor of all time. It can’t be done, I tell you. At least not without much breast-beating, hair pulling and the development of a fine bead of sweat along the upper lip. Oh – excuse me. I think that was a hot flash. Still – this is not easy. So, although I’m painfully caught between the French Rococo & French Provincial . . .

French Rococo! This is my final answer.

What a marvelous time, that French Rococo – not only because of its beauty and grace, but also because its fumes live on today in its far reaching influence in window treatment design.

Those French Rococo-ites got man-a-thing right, to include the long-needed reduction of the heaviest lines and forms of the English and French Baroque to their greater whisper. It was during the Rococo that rooms were finally scaled down to human proportions and designed for the 1st time with real human comfort in mind. Logically, window treatment design followed suit. The newly expressed delicacy and proportion seen in the window designs of the French Rococo – and that would give way to the further restraint of the Empire & Neo Classical period (yum!!!) are still relevant in the more formal rooms in homes today. (But, “I don’t like old things” you say to me. Yeah, I know you don’t, but they like YOU. And their great-great-grandbabies are in your home today.) In fact – we can disconstruct the essence of some of the most frothily whipped Rococo drapery creations that first appeared on the scene at that time, and use reductions of these elements today in order to add a wonderful flourish, a little romance or even some whimsy and humor to a ‘less than formal’ interior today. And we do.

Come walk with me, won’t you? I’ll show you what I mean. 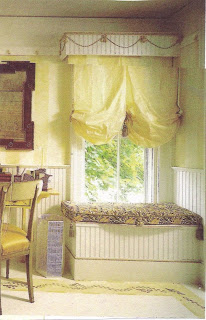 The Austrian Shade . . . and its cousin the balloon. Austrian shades are marvelous in the right environment – a perfect splash of romance – great for privacy. Guess when they showed up: French Recoco. Too much for you? Well, you may more likely own something from its family tree. In today’s lexicon – you’re more likely to see the pared down Balloon Shade or Balloon Valance. These arguably have their roots in the Austrian Shade…a tree planted during the Rococo. The shade pictured here almost looks almost like a hybrid between a balloon & an Austrian.

Layering. No, I don’t mean the Abercrombie t-shirt and sweat shirt your middle schooler is wearing – I mean layering at the window. Today, the crisp look of full planels flanking a window that also has soft fabric shades. . . this design element known as layering, is a trend that tracks back to, you guessed it…The French Rococco. Like your panels tied back low and graceful at the window? French Rococco. It was also during the French Rococco that trims reduced to a more delicate use – as they are still used today to add a delicate wink or just a softening to a fabric treatment. Seen here, a valence paired with delicately scaled tied back panels and sheer shades. Yes, …it is the fumes of the FC you are sniffing here. 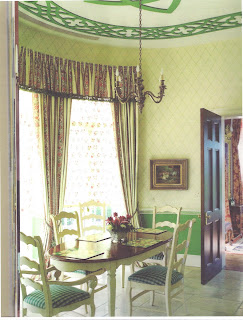 Curved headers: Those “Rococans” sure liked things that arched.

During this period, one could observe formal curved pelmets (Hard shaped treatments) that had a graceful arch to them. The pelmet or lambriquin may be a bit heavy handed for you today – but in today’s language, you may notice other such arches at the widow executed in other ways. Observe the treatment pictured in this this kitchen. Not only does the treatment itself gently arch above the window, but each controlled swag has its own little arch. And for my A-students in the back, if you noticed the layering here . . . a la French Rococco . . you get a gold star.

Sign up today and recieve a free download of Your Luxury Interior Design Project Budget Planning Checklist For Success!

You have Successfully Subscribed!