Yup. That pretty much sums it up. You can either hang up now, or read on to see the highlights of a marvelous seminar I attended recently at the Philadelphia Marketplace Design Center. It was taught by a refined and elegant James Caughman (of Kohler Interiors – group responsible for Baker Furnishings and others…). Mr. Caughman so perfectly and eloquently spun – for a captivated crowd of interior deigners – ‘the appropriate pictures of the day’ that he successfully made his case before the packed house. An art historian by training, his thesis is this: The seeds of luxury today were planted in 17th century France. So right he was. Here’s a synposis. 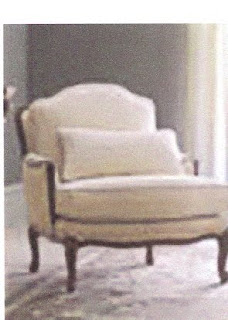 Luxury has never been fair: there are those who have it and those who do not. Those who want it; those who sell it – and those who try to make people want it in order to sell it. From the perspective of word origin, it can be tracked to the Middle Ages, from the word lust or lasciviousness. (hmm…we could spend some time here – but we’ll move on.) Luxury – today and yesterday can be summed up as carrying the fumes of excellent design; excellent materials and fine, artisinal workmanship.

But imagine a time in history- again in the Middle Ages – where restricitons called Sumptuary Laws literally ‘restricted’ what people could wear (to include color!) or what they could own, based upon their social station. These laws were of course designed to preserve a social status amongst the wealthy, the noble and of course the royal. (“It’s good to be the king.” Unless of course – your NOT the king – then it’s not so hot.)

So let’s think about these Sumptuary Laws for a moment from the point of the economic engine: Not great for commerce. If you want to sell a lot of things to a lot of people – it must be legal for them to own and wear it. Happily, it was in late 17th century France that the Sumptuary Law was struck down. But WHY?

Necessity is the Mother of Invention:

Louis XIV may have had the grand idea to build Versailles, but the man and his country were much out of cash as a result. The dilemma faced by all of the Louis’ then was how to create cash – or in their case – gold? The ‘people’ were not happy so heavier taxation was not a viable answer. More importing was certainly not the answer as it would only require more gold to do so and thus further deplete the crown’s riches. And so, a brilliant minister of finance, Monsieur Colbert , suggested to the court at Versailles that France needed to become an exporter of SOMETHING…but what THING? After putting their “Versaillian” heads together – or perhaps they simply looked around at their surroundings for starters – they concluded….LUXURY. STYLE. That’s what they’d sell. That’s what France would become: the grand arbitor of all things regarding taste and beauty – to include – selling it. And so the court set out to set up France as the leading exporter in silk fabrics(and thus usurp Italy, the leader at the time), fine furnishings and fashion. And so they did. Craftspeople and industry innovation were specifically drafted and sought out in order to support France becoming the dictator AND supplier of all things “style.” 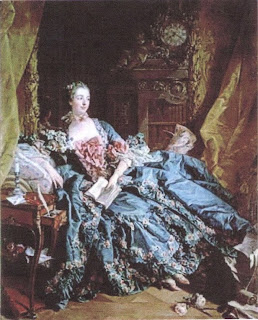 Voila. And so was born in a ‘little’ pretentious, enormously massive and exquisitely beautiful palace names Versailles – the “must have” consumer mindset – the aspirational customer. Luxury as a commodity!

In order to create and drive the thirst to see and be seen – and to have what the ‘in crowd had” – Versailles was promoted into the ‘must see’ destination for the noblesse – the “Hollywood” of fashion and design. To drive the thirst for French silks, the court decided to create a promotion of – for the 1st time – seasonal fashions. (year 1678). And so the news presses would be engaged with a publication akin to The New Yorker – called “Le Mercure Galant – and in it – would be printed pages showing the latest spring, summer, winter or fall ‘must-have’ fashions and hair styles. These single page printings were made with the printing plate. Knowing that – you may now understand the origins of the the expression in which someone is hailed as being a “fashion plate.” The word couture would comes from the French word “to sew or to stitch.” It was Louis XVI’s taste for 5″ stacked red heels that the expression “well heeled’ would be born. And it was Louis taste for diamonds (vs. the pearl a la England’s Elizabeth I), that would drive the diamond trade in India and perhaps even inspire the creation of the sparkling Hall of Mirrors at Versailles which when lit by candlelight was said to shimmer like endless diamonds. 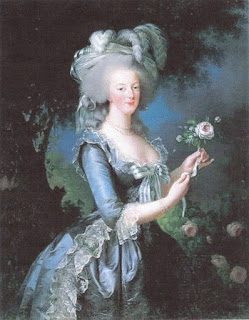 Sorry Jen. You may be cute, young, and thinner-than-thin, but – you’re not the mistress to the king . Step aside. In fact, the styles and ‘must haves’ of the day were not dictated by the king’s queen – and certainly not by a lowly actor. No – the person to follow was the king’s mistress. Louis XIV had his Mm. Montespon (portrait here); Louise XV had his Mme. Pompadore. These 2 revered, sought after, and oft-painted kingly mistresses would be the arbiters of style and taste in their day. Lucky for Marie Antoinette that her hubby, Louis XVI had no mistress, so it was she who set the tone for fashion, hairstyles, and luxury during her time on the hot seat.

From Furniture to Hairstyle? Hmmm… 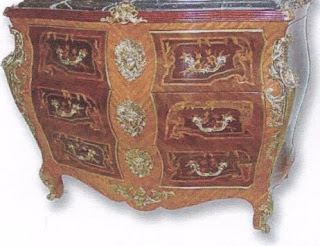 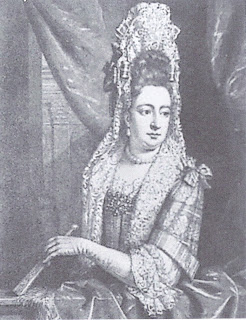 This one I loved. As a whim a matched set of 3-drawer chests were built for Versailles -something that had never been built or seen before. (Remember…we’re’ in the 17th century.) Such the rage was the 3 drawer chest (or commode) – that fairly soon, a woman’s hairstyle would be born in which the hair was piled and rolled at the top of the head in what looked like ‘3 drawers.’ You can no doubt guess its name! (Photod here, I could find only a 2 drawer ‘frontage’ hairstyle, but you get the point. . . do you think she kept anything in it?)

Every design student gets to walk the marvelous path of furniture history while in design school. A thorough look at the humanity’s evolvement from cave dwelling and cave paintings, to the time when rocks and wooden stumps in the caves would eventaully give way to the earliest stools and then chairs. (Getting these early stools and then chairs to stand properly was no synch – but that’s another blog). 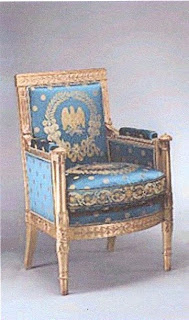 However – look at a history book and you’ll see that comfort was not exactly ‘the thing’ through the middle centuries- that is until the mid 1700’s. It is during this time period – and in France – that design students today can see the 1st scientific sketches of chairs in which comfort was considered – and so chair backs developed their slope, the Bergere chair we know today (and pictured at the top of this blog entry) entered the scene, the arms and rails on the chairs changed, more sumptuous padding and fabrics were used – all to create comfort, as well as beauty and luxury. And from this movement – there developed a slew of wonderful new chair styles during this time- in France. Seen here, lavishly upholstered and padded silk chairs,one of which boasts swags that look as if they were taken direclty off of a courtly gown; the other is richly embroidered as a fine walking coat might have been. 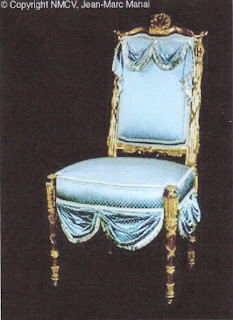 And for fun – I’ve included a portrait of Marie Antoinette wearing a gown that was very much the fashion in her day. The silhouette for women had become quite wide as its skirt was held in a broad vertical line by virtue of side ‘wings’ if you will called panniers. 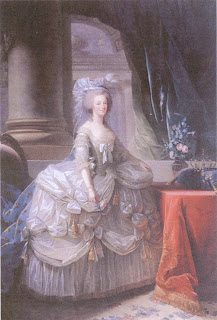 I’ve also included a photo showing the apparatus undergarment that created the sought after silhouette. I show it to you because I recall being fascinated in graduate school when a professor suggested that it was the pannier that pushed the development of the French door – otherwise, one needed it to enter and exit a threshold by turning sideways. Seeing these examples – one can conclude it a fair hyphothesis! Fashion and design – to this day – remain close kin – the one influencing the other. 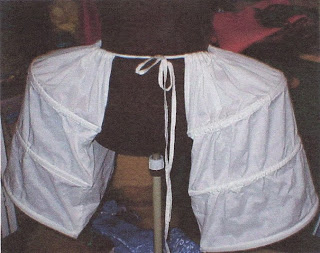 Did Somebody Say Shopping????

Yes. The French did. There was a time when ‘people came to you’ if you were an important person of means. However, the Marchand-Mercier entered the scene during 17th century France- the early department store. . . a wonderful place to experience and go shop for your wares. It was the French who lit buildings and streets at this time in the evening to accommodate shopping and commerce longer into the day. (Do you love these people or what?)

And so the wonderful seminar spun. Mind you – I cannot remember what I had for breakfast today – but I will always remember that it was Louis XIV mistress, Mmd Montespon, for whom one of my favorite shoes was invented: You’ll see them on her feet in some portraits; you see them casually kicked off and placed near her chaise in others . . . the mule! 🙂 Vivre La France!

Thanks for signing up!

By submitting this form, you are granting: Interiors By Donna Hoffman, 1081 Country Hills Road, Yardley, Pennsylvania, 19067, United States, https://www.interiorsbydonnahoffman.com permission to email you. You may unsubscribe via the link found at the bottom of every email. (See our Email Privacy Policy for details.) Emails are serviced by Constant Contact.